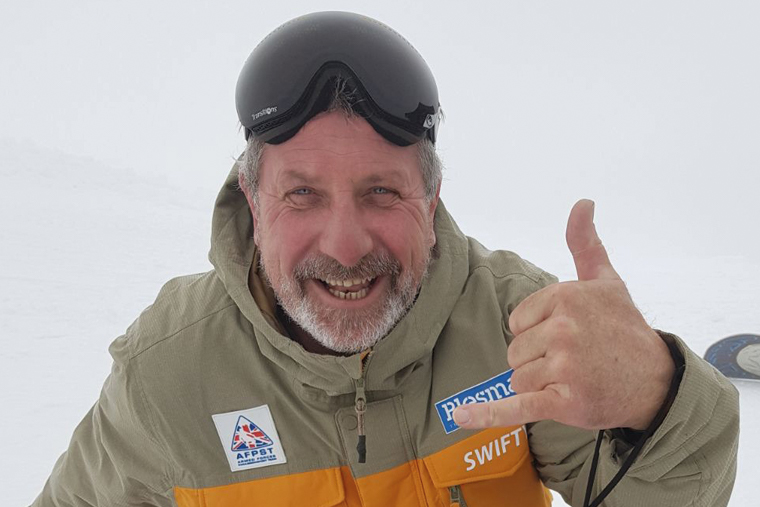 Darren Swift – An Athlete, Adviser and Inventor
Former Green Jacket, ‘Swifty’ talks about his time on the slopes….

As an athlete and mentor, double, above knee amputee ‘Swifty’ has achieved enormous success on the snow. “The charity has enabled me to make new friends in a group of like-minded people – an opportunity which is just as important as any new-found skills on the slopes”.

In 1991, 26-year-old Swifty, was on his third tour of Northern Ireland as a tracker dog handler. When out on patrol in Belfast, he was caught up in a coffee jar explosion that blew away both his legs. Twenty-seven years on, Darren reflects with his characteristic positivity:

“My recovery went as well as could be expected. At the time, I was the only conflict injury on the ward at Headley Court. It took time to physically and mentally come to terms with what had happened”.

Swifty was able to keep his faithful tracker dog Troy by his side throughout his recovery. He continued to track until his dying day and was later buried in the Lake District at a favourite spot.

How has being on snow helped you?

Three years ago, former Green Jacket Darren, discovered the AFPST after a Newcomers Day in Castleford. Having been through the entire training and competition cycle, he’s now an accomplished snowboarder and an inspiration to others starting out in the sport.

“Mentoring Lee Lloyd, a fellow above knee amputee has been a revelation. To watch him grow in confidence and become a snowboarder is such a rewarding experience.

The AFPST has shown me that there is always more to be squeezed out of life. I would encourage others to come and have a go. There’s such a sense of community and a healthy rivalry between the disciplines. Being part of the team has inspired me to keep reaching onwards and upwards.”

Tell us about your new bindings for snowboarders?

Fourteen years ago, bindings that would enable above knee amputees to snow board did not exist. Working alongside his good friend and co-founder Dale Rennard, the pair have created a solution that promises to revolutionise the para-snowboarding world.

“The AFPST has helped me to re-energise binding development by providing the necessary connections to sponsors who have made further advancement possible. Already we have a tested and proven the design concept of suspension in bindings. We are now working out how to make them lighter, more ergonomic and cheaper to produce. What’s more, we hope to be riding them by the end of the season”.