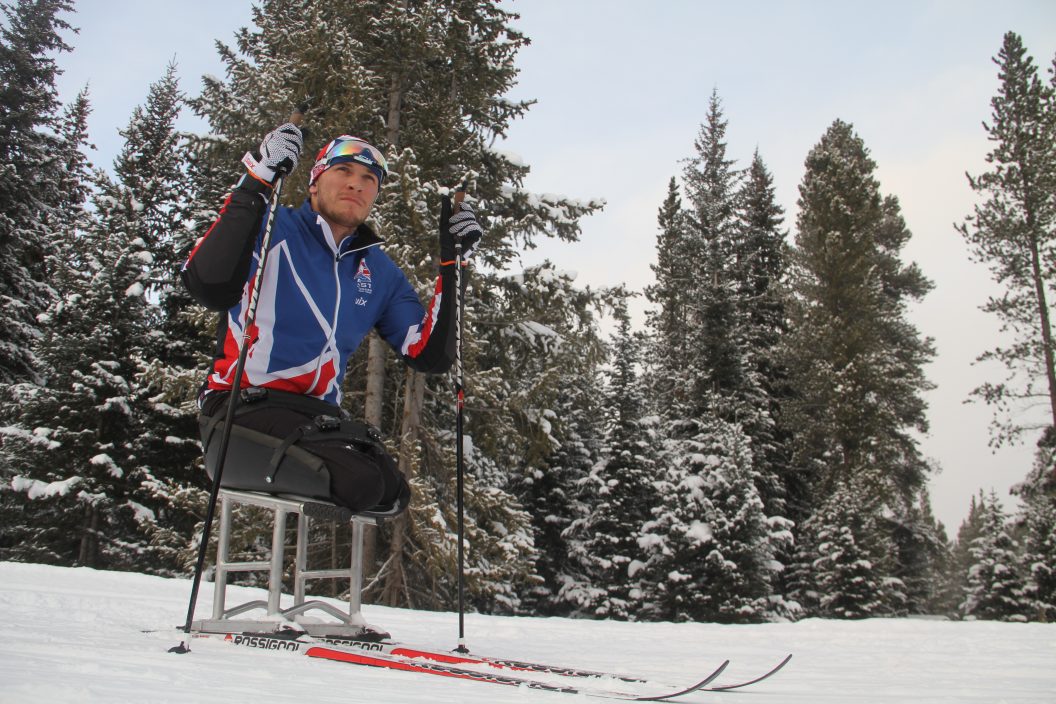 Former Private Scott Meenagh achieved his boyhood dream of being one of the most elite professional soldiers in the world when he joined the Paratroopers. Post-injury, his goals have changed and he has redefined himself through sport, setting his sights on being the first sit-skier to represent GB at the Paralympic Games next year.

“I absolutely loved being a paratrooper and being part of a strong, tight knit unit. There’s a sense of being proud of your achievements and what you’ve overcome to get there. We relied heavily on each other and there was real cohesion between the lads.”

Scott was just 21 years old when he lost his both legs above the knee during an incident in Afghanistan. He was part of a recovery operation to find the kit belonging to a soldier injured by a roadside bomb when he stood on an IED. He simply refers to it as a “rough day at work.” Scott was flown back to the UK and spent the next four months in hospital. He said although this time was tough, it gave him the chance to think hard about what was next for him.

“All I wanted to be was a paratrooper or rugby player. Those two things had been taken away from me so I had to re-evaluate and start breaking things up and think about what the rest of my life would look like.

“I knew immediately that avenue and part of my life was over and I had to find a new purpose and reason to get out of my bed. I wanted to find something I could redefine myself through. I didn’t want to dwell on those days. I wanted to get up and do something with my life. It was hard to walk away from a part of my life I loved but I had to.

“I knew I needed a new focus and for me, that was learning to walk again. I wanted to be mobile and independent and be the master of my own fate again.”

Scott spent two years at Headley Court Rehabilitation Centre which, despite the gruelling times, he looks back on it fondly because of the incredible individuals he met along the way. It was through Headley Court that he was introduced to Help for Heroes and he was soon opened up to a new world of sport through the Battle Back programme.

“I was able to find a new drive and a new reason through sport. I was one of the lucky ones in that respect. It helped me focus on what I can do, not what I couldn’t. It enables you to learn new skills and find new limits. It’s a great way to reinstall confidence which has been lost. Sport helped me find that infectious optimism.”

From taking part in the first Invictus Games in London 2014, Scott realised his future career would lie in sport.

“I used to walk into a room, stand tall and feel very proud of myself and feel very capable. I really lost that after my injury. Through finding sport and that purpose, I found that extra couple of inches. I felt tall, I felt strong. It helped me find my way again. Invictus was that springboard.

“What I really like about sport is it has a nice way of humbling you. Getting into a high performance environment, no one cares how you lost your legs, they care about how fast you can run the 1,000metres.

“I don’t want to be a victim, I don’t people to feel sorry for me. I want to achieve, I want to be redefined. I want to be known for other achievements, not for the guy that lost his legs at work 7 years ago. Sport has helped me move on with my life. It’s given me more of an identity as a sportsperson rather than as an ex soldier.”

Scott was part of the Paralympic Inspiration Programme (PiP) when Help for Heroes took a number of beneficiaries to the Sochi Winter Paralympics to get an understanding of what elite sport is all about. It was here that he first discovered Para-Nordic Skiing.

“I was amazed by it; the physicality, the skill, technique, the environment. It looked a lot of fun, like real life Mario Kart! The fire in my belly was lit.

“For me it’s all about the journey. I didn’t wake up one morning and think ‘I want to go to the Paralympics’. My mind set was that I wanted to throw the kitchen sink at something. I want to commit, be diligent and work extremely hard. It’s about being the best person in yourself you can be and bettering yourself every day. If you don’t, down the line will be that unanswered question of what if?”

Through the H4H partnership with AFPST, Scott was able to turn a skiing hobby into a real chance of Paralympic glory.

“I very narrowly missed out on the Rio Paralympics with GB Rowing. I know what it’s like to work really hard for a few years and miss out on that ultimate goal and what it feels like to not be on that plane. I made a deal with myself I didn’t want to feel like that again. I want to do everything I can to make sure that I’m going to the Paralympics.

“I feel incredibly lucky to be given the opportunity I have. I feel fit, I feel strong and I have the chance to do something really special with my life.

When your skiing by yourself, it’s stunning. It’s quiet, it’s peaceful, it’s a total escape. A real sense of “freedom. I really hope our journey inspires others.

“I want to look back and feel we’ve truly blazed a trail for others to follow.”

Thanks to @helpforheroes for the write up and support to this Athlete.