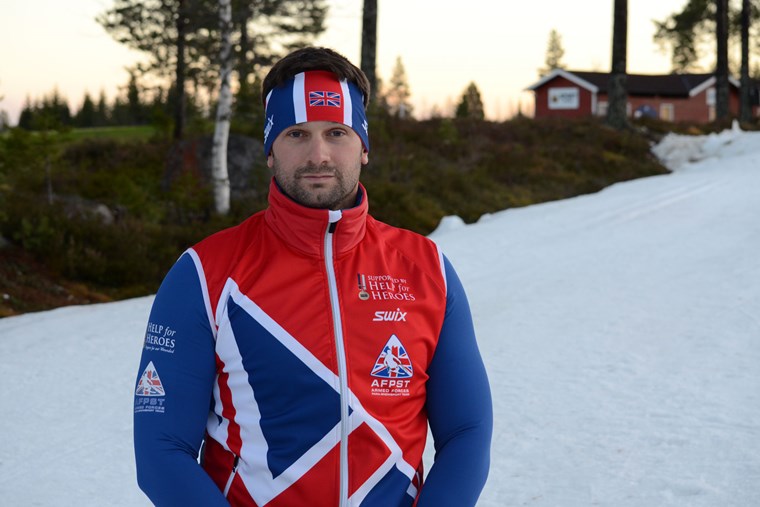 When former Staff Sergeant Steve Arnold joined the Royal Engineers, he was carrying on a family tradition. His Grandad, Dad and Brother had all served and Steve was passionate about fulfilling his boyhood dream.

“Most boys dream of being a soldier. I realised very young that I wanted to be a part of that.”

Steve served in the Army for 16 years, completing tours in Kosovo, Northern Ireland, Iraq and Afghanistan. He has a vivid recollection of the day in April 2011 his life turned upside down.

“I was leading a routine search operation in Afghanistan when I stood on an IED and lost both of my legs above the knee. Initially when I stood on the device I didn’t realise it was me until my team started calling my name. I tried treating myself but my team reached me and helped put the tourniquets on.

“It was like a burning sensation in my legs.”

It took just 17 minutes from Steve standing on the IED to him arriving in Camp Bastion. Whereas usually a C-17 would transport injured servicemen and women back to Birmingham, a sandstorm meant Steve underwent his first operation at Camp Bastion. From there, he spent three weeks at Birmingham Hospital before arriving at Headley Court Rehabilitation Centre where he stayed for 3 and a half years on and off.

“After the injury there were a few tough days thinking about it. Having your military career ended in one bad moment was always going to be difficult to get your head around. I completed 16 years but I’d like to have done the last 6 years and do a full service.

“Having your military career end in one split moment at just 31 years old, when you’ve just been selected for promotion, is hard. I didn’t know what I’d do next and how I’d support my family.”

Steve found solace and inspiration from being at Headley Court, surrounded by like-minded individuals.

“You move on because you know guys have done it before you.”

It was here that Steve was introduced to hand cycling and Help for Heroes. In 2012, just one year after his injury, Steve completed the Race Across America with the charity.

“Cycling got me out of my hospital bed and it gave me the freedom and adrenalin I’d been missing. I’d never cycled even when I still had my legs – it was exciting and a new sport.”

His potential was clear and he soon started working with British Cycling. He set his sights on reaching the Paralympic Games as a cyclist but his contract ended after Rio.

“I was gutted but I had 3 and a half years to get myself to an international athlete standard. Through Help for Heroes I was introduced to Nordic skiing in January 2017 and I loved it straight away. It felt like another new beginning and I was extremely grateful.”

Despite doing the sport for less than a year, Steve is on the path to PyeongChang and has a World Cup race in Canada this December where he hopes to set a qualifying time.

“Looking at the bigger picture the big aim is to get to the Paralympic Games in March but I’m fully focused on Canada. The journey I’ve had from just missing out on the cycling and coming into this sport less than 12 months ago, to hit the standard and go would be an incredible feeling.”

“The real inspiration for me is being the best I can be. I want to show my family that although I was badly injured, I’m still the same Steve that I always was. Life goes on and I’m motivated to show them I’m still happy and doing something I love.

“Military was Plan A, Cycling was Plan B and now I’m onto Plan C. I don’t want to see it end the same way.”

Steve is also determined to create a lasting impact by inspiring others to try Nordic skiing.

“We don’t want to go to the Paralympic Games and it end again for another 20 years. We want to create a legacy and move this sport on and inspire others to take this up.”

Thanks to @helpforheroes for the image, write up and support to this Athlete